Michael Weinstein, a 13-year pancreatic survivor and PANCAN volunteer, emphasizes the need for continued involvement and advocacy related to pancreatic cancer by sharing some sobering statistics about the disease.

Bert Baron, host of this past Sunday’s Purple Light Event at Camp Harmony in Warren, NJ, and DJ at WTCT 1450am, advises those affected by pancreatic cancer to contact the Pancreatic Cancer Action Network for further information and assistance. 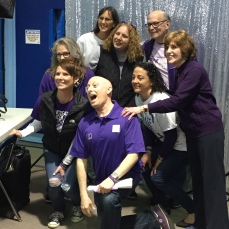 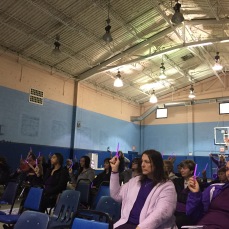 Purple Light organizer and PANCAN volunteer, Todd Cohen, discusses the connection between his ‘camp family’ at Camp Harmony and his ‘purple family’ of pancreatic cancer survivors, caregivers, and volunteers, in addition to paying tribute to both Franco Juricic and Bruce (2:44).

Speaking at this past Sunday’s Purple Light event, Michael Weinstein, a 13 year pancreatic survivor and PANCAN volunteer, pays tribute to Franco Juricic and Bruce, while emphasizing that it is all the volunteers that continue to work tirelessly to fight pancreatic cancer that are the real heroes. 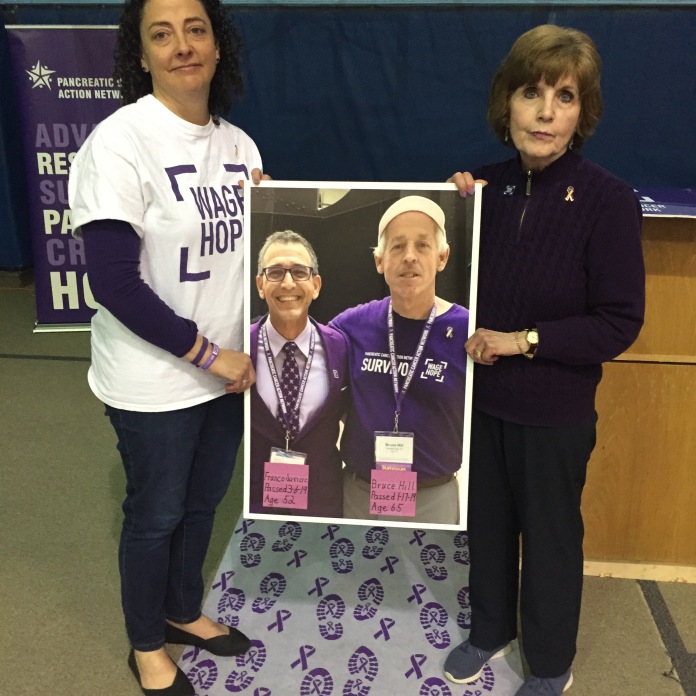 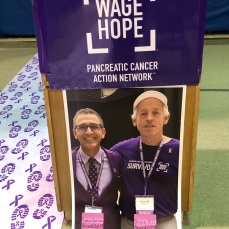 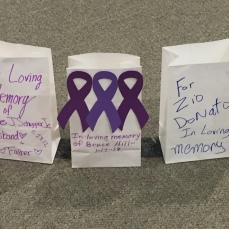 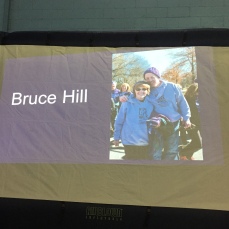 Facing her first major holiday without Bruce, Linda delivers a message of hope, positivity, and commitment for everyone during this Easter/Passover holiday season. 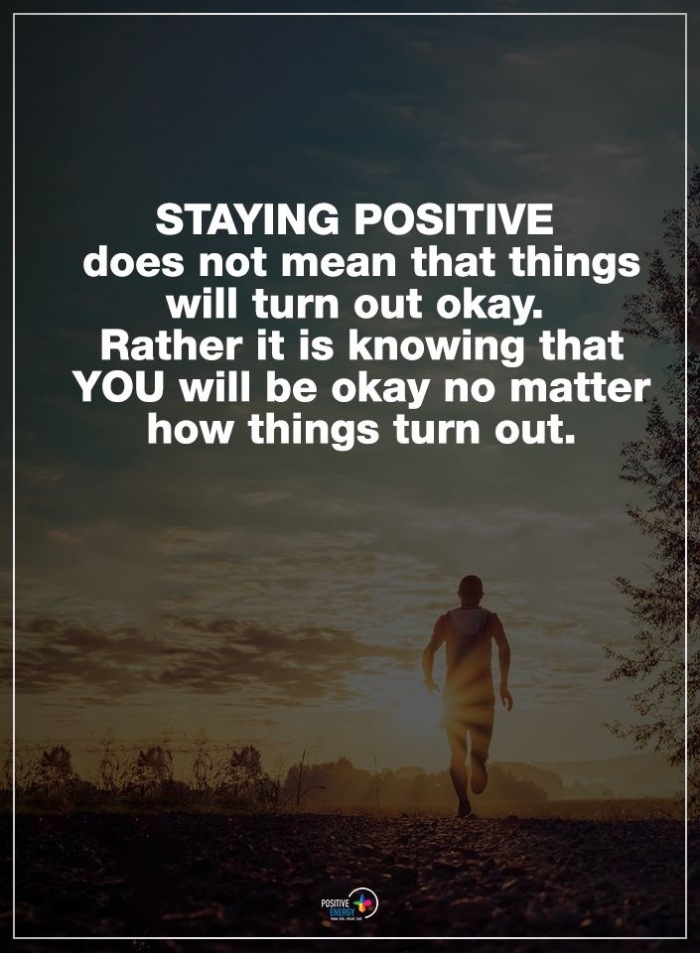 Kayla Schneider, Affiliate Chair of the New Jersey Affiliate of the Pancreatic Cancer Action Network, highlights all the important work being done by PANCAN, in addition to sharing her own personal connection to pancreatic cancer. 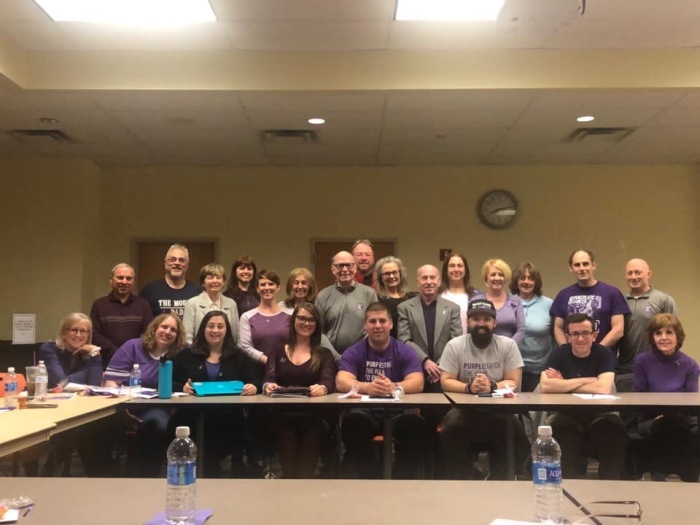 Linda delivers a heartfelt message after successfully completing her first 5K without Bruce walking by her side. 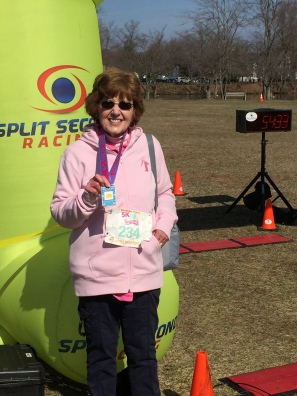 Hope’s Alive was Bruce’s favorite song and it was written and recorded by Erin Willett who lost her father to pancreatic cancer. All proceeds from the song go to the Pancreatic Cancer Action Network. For more information about the song and where to download it, click HERE. 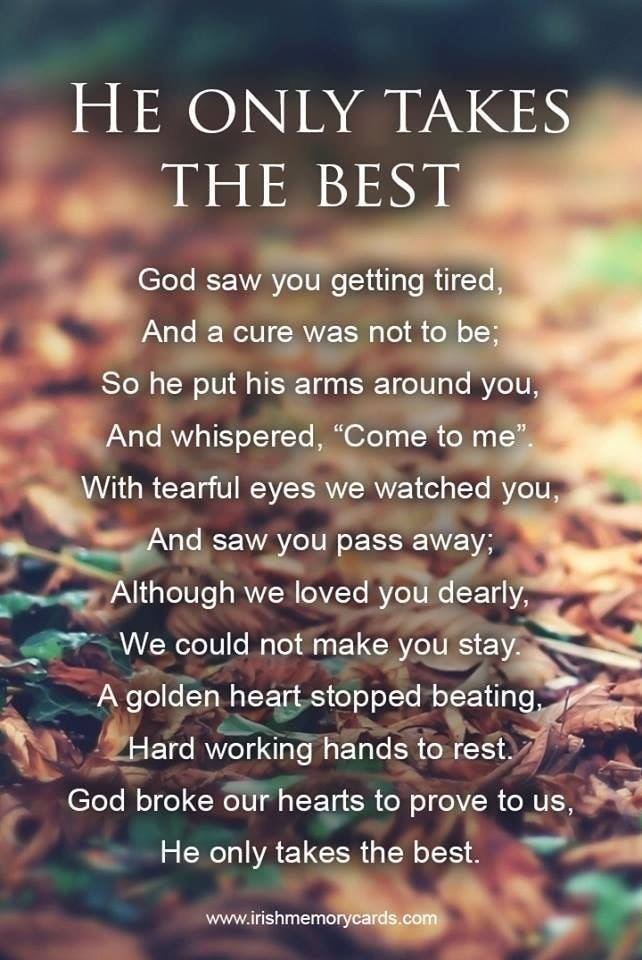 When Bruce first told me he didn’t want a traditional Wake, I suggested a Celebration of Life instead. He asked me what that was so I explained what I knew about it. He listened and looked at me and said: “Do you think anyone would come?” I said: “Are you kidding? For you, everyone will come.” Thank you all for proving me right and for being here today.

There are several people I need to thank.

First of all, none of this would be possible without Henry Schmidt’s help, so thank you, Henry. I’d like to thank everyone who donated food, made our centerpieces, or helped with setting up. many of you have been here since early this morning. There are too many to name but I appreciate all of you. Doug not only wrote Bruce’s obituary and eulogy, and designed our program and bracelets, and did our slide show, but he and his friend, Marc, made a beautiful video which you’ll see shortly. Jen did our picture boards and the framed picture of Bruce. Chris and Jen bought all of the items for the kids. Chris will be our DJ today. Bob Pecarific assisted with our audio.

One member of our Wage Hope family, Muskaan, deserves a special acknowledgement for driving Bruce and me into the City for all of our appointments at Sloan Kettering and Weil Cornell. Few of you know that outside of the hospice staff, Muskaan was the last person to see Bruce alive. She stayed at the Hospice after the rest of us had left. I had a bag packed to stay overnight but I was told to go home and rest and that it was unlikely Bruce would pass that evening. Sadly, I got that terrible call a couple hours after Doug and I got home.

Bruce’s brother, Wayne, and his wife, May, were at the hospital with Bruce every day just as they were when he had his surgery. Another brother drove with his son straight through from Florida to see Bruce. The day they got to the hospital was Bruce’s last good day.

Debbie, Michael, and Gianna were with us at the Hospice on Bruce’s last day. They tried to come back after Doug called to tell them about Bruce but it was snowing and they were forced to turn around. My sister stayed with me for two weeks after Bruce passed, stocking up my freezer so she knew I’d have something to eat after she left.

As most people know, Dylan Flinchum was Bruce’s super hero. He gave Bruce strength to fight these past three years. Any time Bruce had a setback, he’d always say the same thing: “This is nothing compared to what Dylan goes through.” Dylan was supposed to be here today but he had a setback of his own recently and could use our prayers. Dylan’s four grandparents are here. By the way, I’m sure if Bruce were here he’d tell all of you that you should attend Dylan’s next Dinosaur Stomp on May eleventh.

More than anyone, I have to thank my family here by my side, as they’ve been for Bruce and me throughout the past four difficult years. A special thank you to Doug, Chris, and my fourth son, J.P. I would not have made it through the terrible night of January 17th and the early morning hours of the 18th without them. They were beyond amazing!

In the past four years, I was diagnosed with cancer and underwent three major surgeries. Bruce was diagnosed with cancer and underwent surgery, numerous rounds of chemo and radiation, and a brief try with a clinical trial. Laura had chemo, radiation, and surgery after her own cancer diagnosis, and she’ll have another surgery this summer. Chris underwent an emergency appendectomy. Jake was hospitalized with a serious illness that lasted months and left him unable to walk for a while. Ella was hospitalized as an infant with a serious virus. And not to be outdone, Colin had to be rushed to the hospital after a terrible accident outside his school. All the while, the constant in my life and the person who kept me sane was Bruce. He would always say, “This is just a bump in the road.” Then he’d assure me that everything would be alright. I have Cat scans every three months and the week after next, I face my first scan without Bruce by my side to reassure me. Fortunately, Chris is going to take me for my scans. I’m hoping Bruce’s strength and positivity will get me through whatever lies ahead.

Finally, as much as I appreciate all of you being here, and I do, if you really want to honor Bruce, live your life as he did—be kind and care about others.

Members of the Northern New Jersey Affiliate of the Pancreatic Cancer Action Network march at this year’s St. Patrick’s Day Parade in Morristown, NJ, in honor of Bruce and Franco. 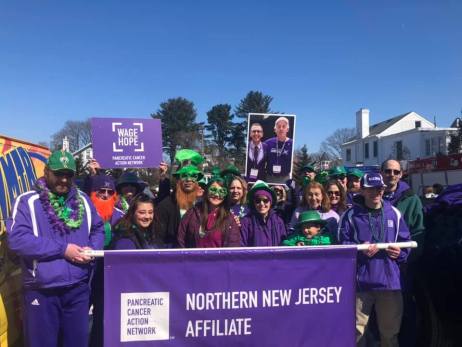 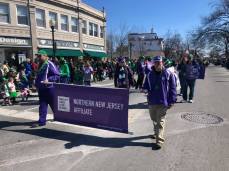 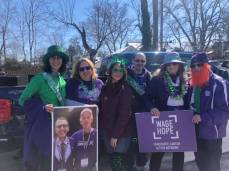 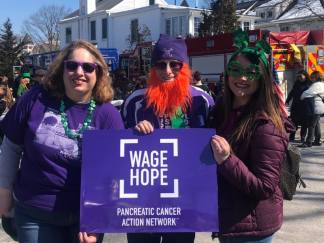 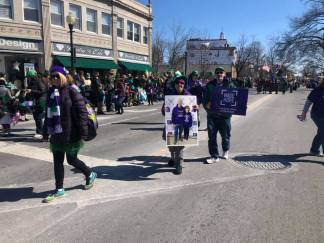 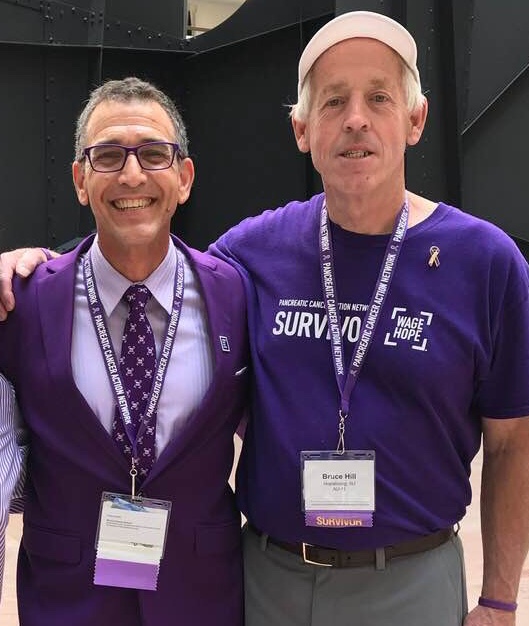 Bruce Hill was a Stage 4 pancreatic cancer survivor who made it his life mission to inspire those suffering with cancer or any sickness with a message of positivity, faith, and hope.